According to a new report, Nintendo is looking to add more mobile software developers in its team in the vein of Super Mario Run and Animal Crossing: Pocket Camp. The gaming giant has decided to expand its roster of smartphone game developers after its partnership with DeNA “fell behind schedule.” It was back in march […]

The most used messaging app in the world is WhatsApp, owned by Facebook. The recent update of the app came up with a very useful and surprising feature which lets the users delete sent messages within 7 minutes. This feature gave lots of people a big smile on their face as mostly mistakes happen like […] 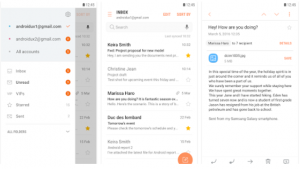 According to Google Play Store listing the email Android app by Samsung has achieved more than 100 million downloads within the current month. The app was launched in January and ever since has remained widely popular on Samsung Galaxy devices which show that there are over 100 million Samsung devices on which Android 7.0 Nougat […]